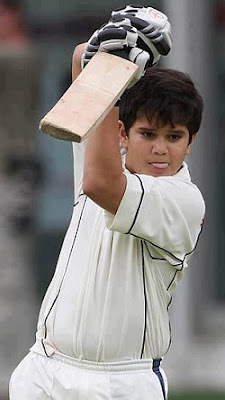 Sachin Tendulkar's son Arjun was among those picked for Mumbai's u-14 squad on Sunday. The 15-member squad will travel to Ahmedabad for the January 20 to February 1 West Zone tournament. Arjun, 13, had made his mark in local tournaments with his all-round skills.

The left-hander has proved to be useful middle-order batsman and an effective medium pacer. Arjun's knock of 124 in the local tournament had a big role to play in the teenager making the cut.

Tendulkar Sr tried to play down his son's big break by saying Arjun needs to left alone. "Like any other parent I feel extremely happy & proud that he is part of Mumbai U-14 team. His hard work has paid off. I hope that people leave him alone to enjoy this beautiful game as a normal member of the team," Tendulkar told The Indian Express.

I used to wash my car to take my mind off cricket: Tendulkar

Known for his penchant for sports cars, Sachin Tendulkar has said during his earlier playing days he used to clean his cars to divert his attention from cricket.

The highest run scorer in international cricket, Tendulkar, who retired from one-day international recently, said he used to find it "relaxing" to wash his cars.

"Not that often that I clean my cars nowadays. It was back then when I had a little more time. Those days I used to shampoo and wax the cars myself, because I cared about my cars. I find that relaxing," the veteran batsman said at the Bloomberg TV Autocar India Awards 2013 last night.

"I have got some friends who are as crazy about cars as I am. It was more to take my mind off cricket and relax," he said adding that some players seek his advice on cars. 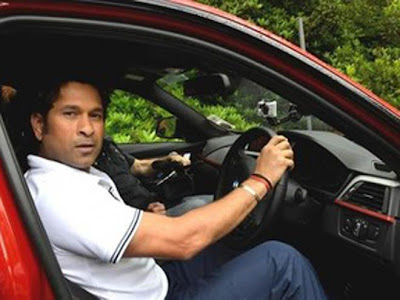 Taking a walk own the memory lane, Tendulkar recollected his childhood days, when he dreamed about owning his four-wheeler.

"My passion for cars started when I was 8-9 years old.

Living in Bandra, just behind our building there was a huge open air drive-in theatre and all the big cars used to come there and park. Those days it was Fiats and Ambassadors or an occasional Contessa or Standard 2000. That was the time when I used to stand in the balcony and tell myself that one day I should have a car of my own," he said.

Tendulkar said he has to lie to his wife Anjali about the specifications of the car while deciding to buy it.

"I have to tell her it's a four-door family car. I am talking about the M5 (BMW M5-series). I tell her it is not that fast. It has got good suspension. The kids would really enjoy. It has got a couple of screens at the back, so they can watch whatever they want to. I have never really mentioned 500bhp or whatever. I hide it," he said.

A follower of motorsports, the 39-year old said that he has had sleepless nights before an F1 game.

"I keep myself updated through magazines. I watch auto programmes and F1 races. I have had sleepless nights before watching a formula 1 game. I have always admired good cars," he said.

On what he likes in a car, "I like acceleration. I want a car to speak to my heart. When a car speaks to your heart, it keeps growing on you, which is fantastic. You start taking care of your car. That is when you start shampooing and waxing your car."

Sachin Tendulkar – Soul that inspired a generation of young people

We know it’s always been country first for Sachin Tendulkar, yet his gesture of pointing to the Indian flag on reaching his 100th international hundred brought tears to my eyes.

I still can't come to terms with the enormity of the impact of Sachin Tendulkar's decision to bid farewell to One-Day Internationals (ODIs). It had to come some day, but never thought it would end in the way it did. One-day cricket has to grapple with an irreplaceable void. I wonder what will attract fans to the ground now when there will be no divine straight drives or effortless back-foot punches anymore. For me, ODIs are over. 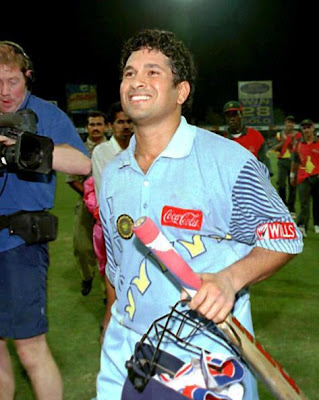 That’s surprising, because my generation has grown up inspired by ODI cricket only. T20s arrived only recently. And Tendulkar was the soul of that inspiration. Everything from our stance, to the MRF sticker we pasted on the Rs 40 bat, to the follow through of our drive and the light-weight pads had his presence. As teenagers, we would watch in awe his strokes during that unbelievable 1998 season against the world's best team and try to emulate the same in local gully matches. It was an inspiration watching him battle the Desert Storm in Sharjah, when he blitzed to 98 at Centurion or the manner in which he destroyed Dale Steyn and Company to score 200. Those memories are vivid because they bought a smile on the faces of his countrymen – young and old alike; an unadulterated smile that is becoming a rarity in our lives.

I know the kids would dismiss some of our memories and say it’s impossible as cricket is just a game. But then, instead of arguing, we would know you had to be born in the Sachin Tendulkar Era to appreciate the fact that when the maestro was at the crease cricket, for the billions in India, was more than a game. The nation found solace while he was fighting those battles on the field, alone and mostly wounded, but never defeated.

My heart aches to think that we would not have those butterflies in the belly anymore when he steps out to open the innings, when he faces the first few balls, our hands clasped in silent prayer. It’s all over.

Thanks for the awesome memories, Sachin.

Sachin Tendulkar is best batsman I have seen in my life, says Pakistan's Hanif Muhammad

Pakistan batting great, Hanif Muhammad today rated Sachin Tendulkar better than the legendary Australian Sir Donald Bradman and described him as the best batsman he has seen in my life.

"I am one of those fortune people who have seen Bradman and Tendulkar bat in my lifetime and in my opinion Tendulkar is the best batsman I have seen in my life," Hanif said today. 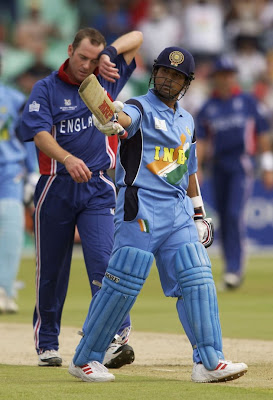 Hanif, who had earned the sobriquet of "little master" like Tendulkar for his batting feats in the 50s and 60s, said he had not seen a better player than Tendulkar.

"I am very sad to hear that Tendulkar has decided to retire from One-day cricket. I hope he continues to play Test matches. Because to my mind he could have played on even in ODIs for another two years," Hanif said.

"He remains to my mind still the best player in the world. I have never seen a more complete player than Tendulkar and I have always been a great admirer of his batting," Hanif said.

The former Pakistan captain is due to leave for India as a goodwill ambassador for the Pakistan cricket Board during the current one-day series.

"If possible I will definitely like to meet Tendulkar and have a chat with him in India. It has been a great experience watching him bat all these years," he added.

Overall the Pakistan cricket community has paid rich tributes to Tendulkar but also expressed surprise at the timing of his retirement from ODIs.

"It is a bit surprising considering he was always such a fierce competitor against us and wanted to do well against us. His last two innings against us have been half centuries. I would have thought he would chosen this series as his farewell ODI series," former captain, Wasim Bari said.

The 22 yards seemed to belong to Tendulkar: Ganguly

Former India captain Sourav Ganguly, who forged a terrific opening combination with Sachin Tendulkar in ODIs, spoke to The Telegraph from Calcutta on Sunday evening. 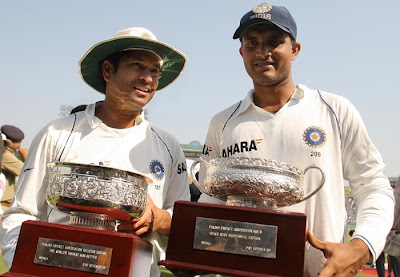 Has Sachin’s decision surprised you? Did he get the timing right?

A I think it’s fine as far as the timing goes... I’m not surprised as Sachin hardly played ODIs after the 2011 World Cup... Now, he’s got people off his back, for many had been telling him to quit.

What would you have done in Sachin’s place?

Look, every individual deals with situations differently. Nobody plays for records... You play because you’re passionate about the game and it’s the passion that counts.

Should Sachin have quit ODIs after the 2011 World Cup?

What made Sachin such a destructive batsman, particularly in ODIs?

Moving up as an opener is the best thing to have happened to Sachin... He had the maximum overs and made the most of his boundary-hitting abilities... He paced his innings very well... That he’s technically so correct helped in making him so destructive.

It was Sachin’s idea to open, on the 1994 tour of New Zealand, when Navjot Sidhu had an injury...

(Laughs) Interesting... So, Sidhu’s made quite a few careers!

Which of Sachin’s innings come to mind instantly?

There was a period when Sachin took batting in limited overs cricket to quite another level...

He did, yes, but in Test cricket too. The 22 yards seemed to belong to Sachin.

The two of you had 26 century partnerships in ODIs, which remains a record. What went into the making of such a successful pair?

One, that it was a left-right combination... We understood each other well and one could anticipate what the other would do... Both of us could hit boundaries almost at will... That we could play in all conditions also made us successful.

Did the two of you only talk cricket during the mid-pitch ‘conferences’?

(Laughs) Largely cricket... Who was bowling well, if one of us needed to change our approach... The situation we were in.

What was it like watching Sachin from the other end?

Sachin hasn’t spelt it out, but it’s assumed he’s available for Test cricket. Your take?

Doesn’t surprise me. Sachin will surely continue playing Test cricket, but can’t be for long. Only Sachin can decide when to call it a day... He should go when he wants to... Left to me, I’d quit all formats at the same time.

Have you spoken to Sachin in recent days?

Not a lengthy conversation.

What will you tell Sachin if you do get to talk to him in the near future?

The final one... As a nation, do we treat our heroes the way they should be treated?

We don’t, we should treat them better.

Fan(s) on this site